Once again, TDC has played a significant role in surprising and delighting visitors from around the world.

Vivid Sydney – the largest festival of light, music and ideas in the Southern Hemisphere – has come to life. Once again, Australian entertainment technology company TDC – Technical Direction Company – has played a significant role in surprising and delighting visitors from Sydney, Australia, and around the world. As the company has done for the previous ten years, TDC is providing expertise in large scale projection mapping, LED video and technology for a number of the 50+ features.

Vivid Sydney is Australia’s largest event, and celebrates creativity and innovation across all three pillars – light, music and ideas. It takes place annually, and features immersive light installations and projections, performances from local and international musicians and as well as an ideas exchange forum featuring public talks and debates from leading creative thinkers. The event attracts over 2 million people. Vivid Sydney is owned, managed and produced by the NSW Government’s tourism and major events agency, Destination NSW, and runs from 24 May to 15 June throughout Sydney.

Michael Hasset, Founder and Managing Director at TDC said: "The use of projection mapping and video display - using projected light and images to turn buildings and architecture into dynamic art projects - has exploded over the past few years and Vivid Sydney is one of the top examples. We see this trend increasing with a larger focus on interactivity where the audience can really engage with technology and art."

Although TDC has played a key role in Vivid Sydney for a number of years, that doesn’t mean that the company is resting on its laurels.

“We’ve approached this year in a completely fresh, new way – trying to achieve something even better,” said Steve Cain, Head Engineer and Media Server Specialist at TDC. “We’re switching most architectural landmarks over to the 3D workflow with disguise media servers, and away from 2D playback systems. That allows us to take advantage of the most recent advanced in media server technology – 3D modelling, for example. Those features give us far more accurate pre-production planning and projection studies, allowing us to deliver increased projection output. We’re also using disguise’s OmniCal camera assisted line-up systems, and that, together with a multi-skilled team, has helped us get sites up and running far more quickly and efficiently.”

The iconic locations at which TDC’s creativity and ingenuity can be witnessed this year include the Sydney Opera House; the Museum of Contemporary Art; Customs House; Argyle Cut; Taronga Zoo; Cadmans Cottage; and the Rocks branch of the English, Scottish and Australian Chartered Bank. 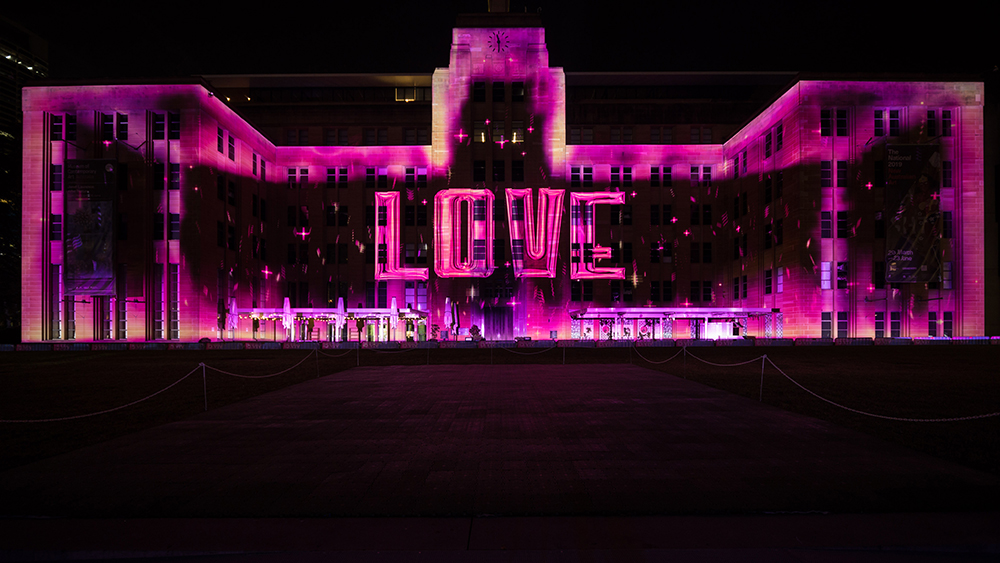 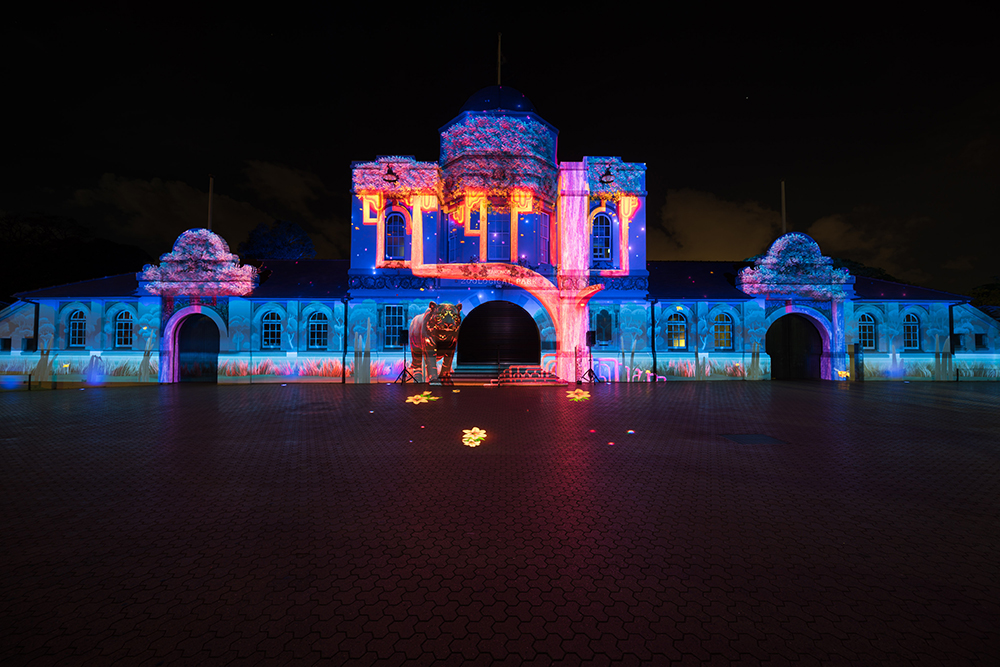 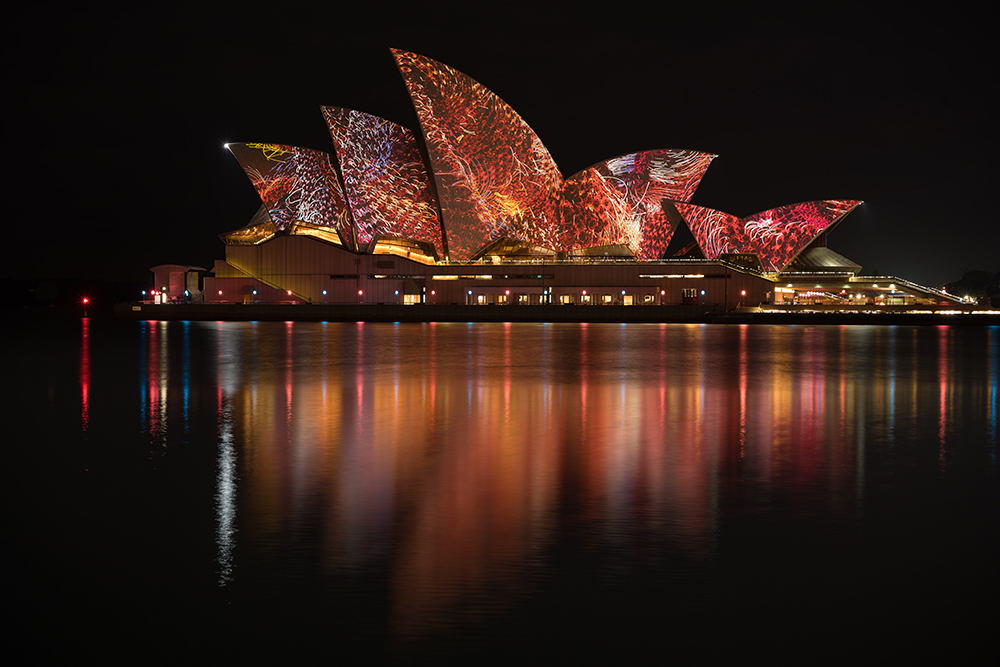 This year, TDC is deploying no fewer than 70 Barco projectors. “We’re shooting around 1,600,000 lumens of light out with a staggering 161, 280,000 pixels transforming buildings across Sydney into impressive works of art,” says Alex Rendell, one of TDC’s Project Manager’s for Vivid Sydney.

“We’re also proud to be running a city-wide monitoring system, our TDC Live View automation platform developed by TDC for show synchronisation, together with real time monitoring and reporting,” he added, noting that TDC had laid some 36 kilometres of cable and fielded a crew of around 30 technical staff.

Vivid Sydney welcomes over 2 million visitors each year, and integral to the success of any large scale event is pedestrian flow. With this in mind Destination NSW approached TDC to develop a system that could relay messages to visitors in real time throughout the city.

TDC’s Technical Services and New Media Manager, Drew Ferors conducted all the R&D into a bespoke solution that resulted in the creation of a city-wide video messaging system: “TDC LIVE View Signage”.

“We designed a system that sees 14 large LED screens deployed throughout the city that are accessible via the cloud from a single point, and that enables the same messaging to be displayed on each LED screen.. it is exciting to trial this system at Vivid Sydney,” said Ferors.

The trial run has been so successful that TDC LIVE View Signage is now available for rental to other organisations.

This year’s Vivid Sydney saw Pixar Animation Studios transform Sydney’s iconic Argyle Cut at The Rocks with a creative light projection that delighted visitors of all ages as they were transported through a visual retrospective of behind-the-scenes artwork and animation. The projection features the captivating characters of Pixar films including the beloved duo of Woody and Buzz Lightyear – marking the release of Toy Story 4 this month. 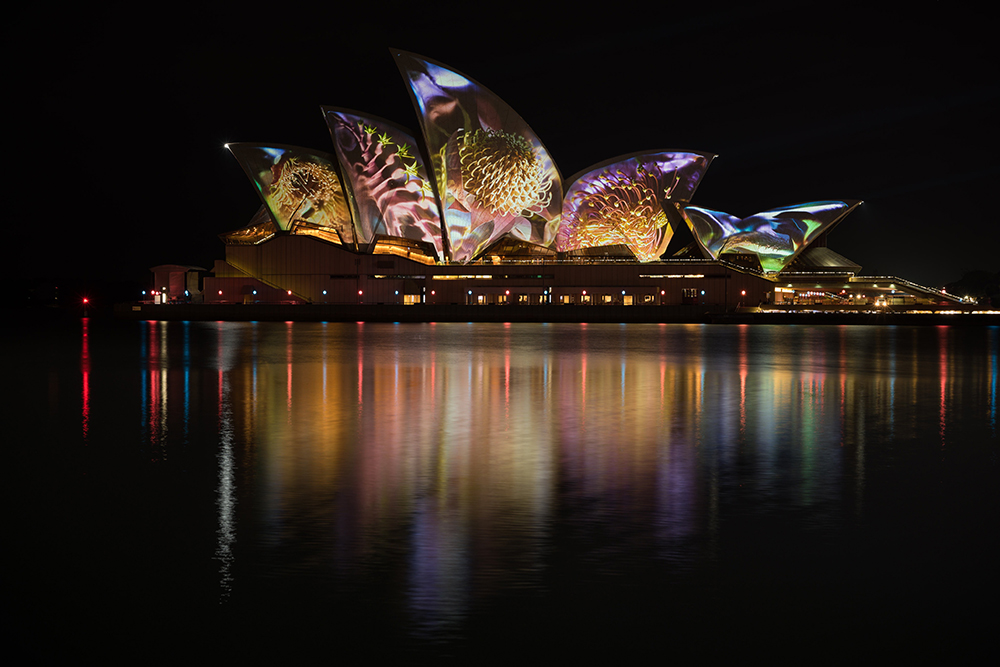 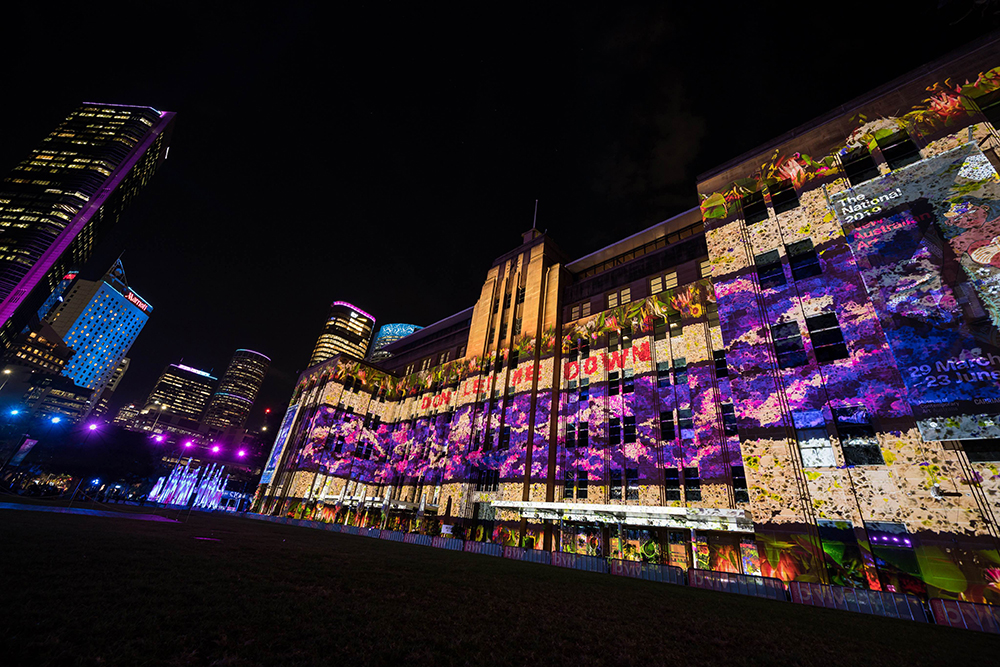 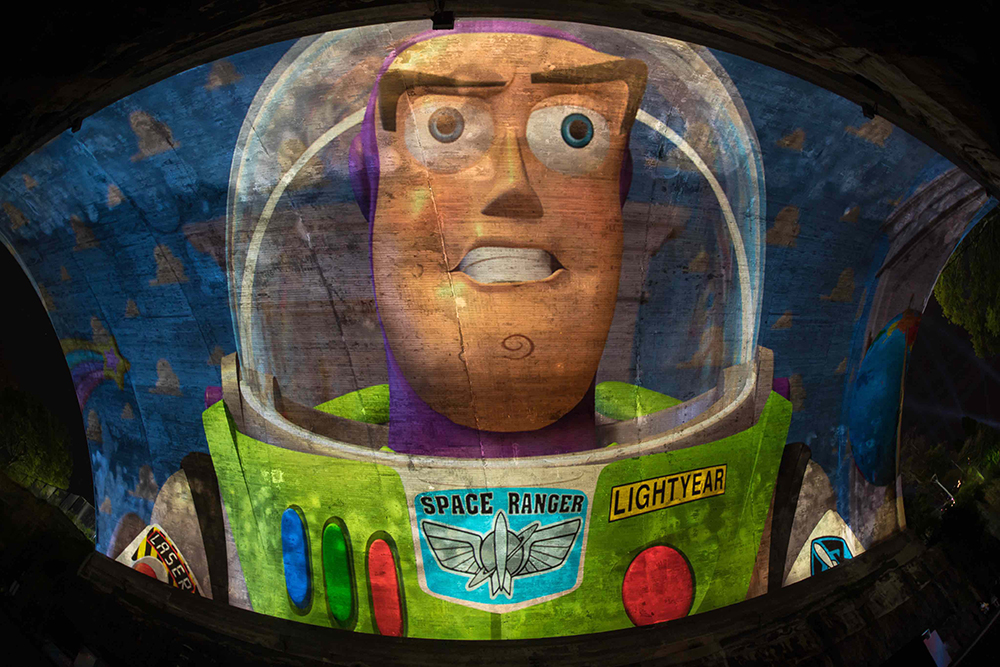 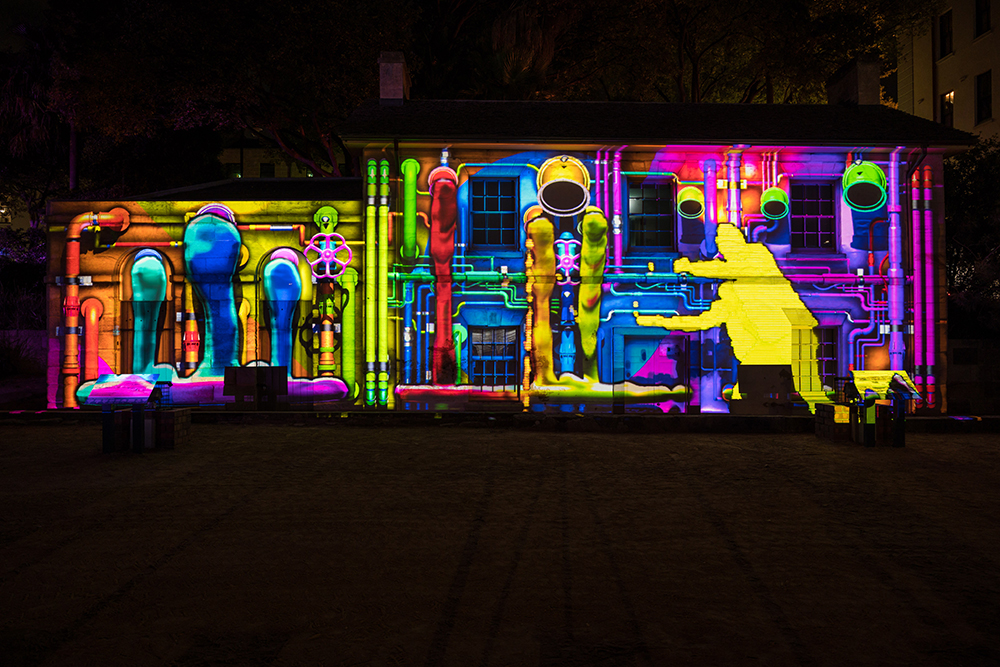 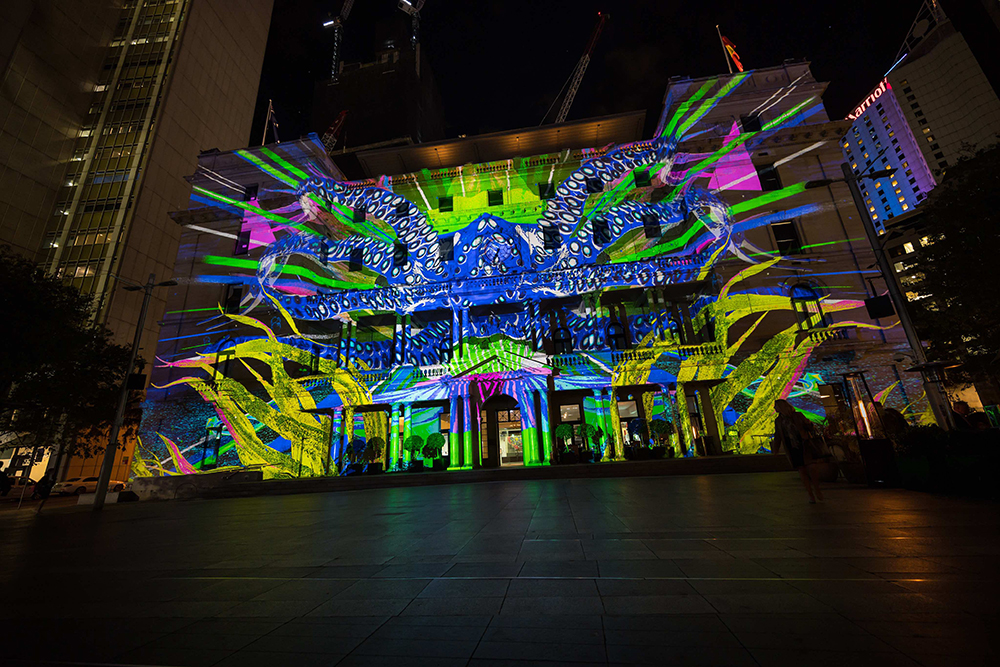 Also capturing attention has been a sold out series of gigs by The Cure at Sydney Opera House, where the band performed their magisterial, slow-burn masterpiece Disintegration.

In an Australian exclusive residency, with the help of TDC, British techno titans Underworld lit up the Concert Hall at Sydney Opera House, creating an immersive dance floor experience for four nights during Vivid LIVE.

Also popular with the public is Austral Flora Ballet on the Sydney Opera House sails. TDC worked with LA-based artist Andrew Thomas Huang to show native Australian floral imagery with motion-captured movement from a live dancer throughout the evening.

Other stand out features include Under the Harbour, a surreal underwater encounter of the marine life within the Harbour. Content is projected onto the entire façade of Customs House. Lastly, TDC worked with artist, Claudia Nicholson and Spinifex Group for Let Me Down to project giant graffiti theme at the Museum of Contemporary Art (MCA) which was also a crowd pleaser.

“With projects like this, it’s all about the planning and preparation,” said Michael Hassett, TDC MD.

“Anthony Pellizzari and Alex Rendell, TDC’s Vivid Sydney project managers, are masters at site planning and external contractor/supplier and client relations. And: we couldn’t do what we do without the hard work and support of the TDC team of technicians, warehouse crew, service team and operational logistics personnel who play a key role in helping us achieve the great results we always do at Vivid Sydney.”